Bring clarity and healing energy into your life, with this up-building orgone generating pendant featuring Labradorite and OM symbol.  It retunes harmful EMF into a healing frequency.  This beautiful & powerful orgone generator comes with a 17″ (43 cm) soft cord and lobster clasp.

Bring clarity and healing energy into your life, with this up-building orgone generating pendant featuring Labradorite and OM symbol.  It also retunes harmful EMF to a healing frequency.  This beautiful & powerful orgone generator comes with a 17″ (43 cm) soft cord and lobster clasp.

Note that healing crystal meanings are spiritual supports to healing, and are not prescriptions or healthcare information.

The main function of this pendant is to clean and convert stagnant and negative energy into beneficial frequencies, with a multitude of beneficial effects.  Zen Dome customers report feeling better, both physically and spiritually as the energy around them starts to flow unobstructed, and life feels more joyful and harmonious.

Relationships improve – for example, many people have gifted their homes or workplaces with orgonite, and they find that their relationships with family and co-workers improve.  Also many people I know, including orgonite skeptics, have experienced much better sleep from using Zen Domes Orgonites.  Spiritual growth goes hand in hand with cleaner energy.  Any home with a Zen Dome grid (see Best Use Guide) can be like a permanent spiritual retreat!

Zen Domes Orgonite does not reduce EMF, but instead protects your body from its harmful effects by converting the EMF into positive, life enhancing frequencies.  Many people have felt instant relief from a simple pendant, although if you are very sensitive to electro-magnetic frequency radiation, you may need to place more pieces of orgonite around EMF-emitting devices (any device powered by electricity whether hard wired or wireless).

Labradorite: the Stone of Magic

This legendary stone is said to have fallen from the frozen fire of the Aurora Borealis.  Labradorite shimmers with a mystical light, and transforms the ordinary into the extraordinary.  Labradorite is the Stone of Magic, a crystal of shamans, diviners, healers, and all those who seek self-discovery.  It is excellent for awakening one’s own awareness of inner spirit, intuition and psychic abilities.

Labradorite is also the most powerful protector of the mineral kingdom, creating a shielding force throughout the aura and strengthens natural energies from within. It protects against the negativity, and provides safe exploration into higher levels of consciousness.  Labradorite facilitates visionary experiences.

Wearing a Labradorite orgone pendant allows your innate magical powers to surface. It enhances the mental and intuitive abilities of clairvoyance, telepathy, prophecy and coincidence control.  It assists in communication with higher guides and in accessing the Akashic records.  Great support while doing psychic readings and permits a safe and grounded return to the present.

The sound of OM encompasses all words, all sounds in human language.  OM is a matrix of all sounds, and it is believed to be the source of all creation.  The ultimate in creative expression.

The symbol OM visually consists of three curves, one semicircle, and a dot.  In Sanskrit, the large bottom curve symbolizes the waking state, A.  The middle curve signifies the dream state, U.  The upper curve denotes the state of deep sleep, M.  The dot signifies the fourth state of consciousness, Turiya (pure consciousness).

The semi-circle at the top represents Maya and separates the dot from the other three curves. It signals to us that all is illusion and can be an obstacle to realization of the Highest.

To qualify as a Zen Dome, the orgonite has to be precision-made, beautiful, and as unique as possible. Only the most effective orgonite is selected to become a Zen Dome.

Once a design is chosen, the orgonite is energetically charged. I personally infuse each one with the intention of giving you the best results possible for your highest good. I also charge and activate the crystals within.

As a result, Zen Domes are created in small batches and are only available in a limited supply.

Once you order the designs you most desire, each Zen Dome is then made especially for you, so it will attune itself to your life force energy, producing maximum effect.

In keeping with my commitment to quality, Zen Domes take time to create, cure, energize and ship. You should receive your order within 30 business days.

There are no reviews yet.

Be the first to review “Mystic Orgone Pendant” Cancel reply 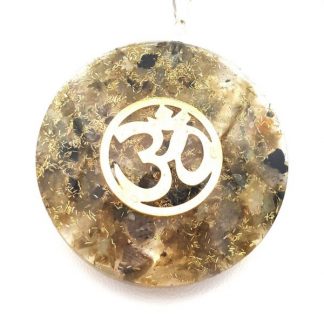